The BG 24 H is – like all rigs of the BAUER BG-series – primarily designed as a rotary drilling rig for several drilling methods such as Kelly drilling, CFA-system, FDP displacement piling.

The possibility of using a BG rig for other methods by adding various attachments is an in-built advantage of the BG series. It can be used as carrier for soil-mixing methods SMW and CSM. The attachment of hydraulic hammers (FAMBO) or Diesel hammers (PILECO) is another application. Bigger BG rigs are suitable for mounting BC trench cutters. 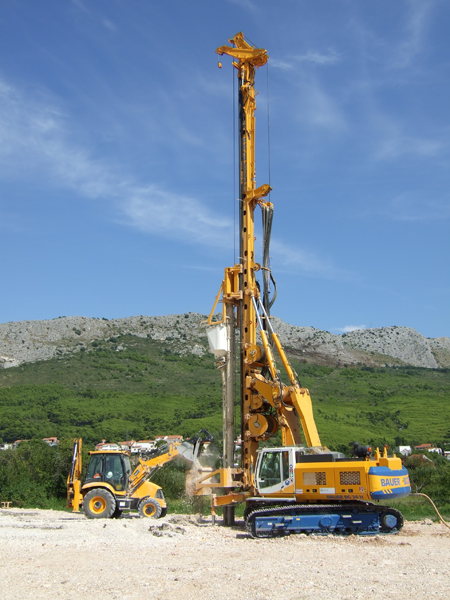 The versatility of the BG 24 H was demonstrated on a big soil improvement contract in Croatia. Soft sandy silt subsoil underneath a new highway junction near Split had to be improved with 60.000 linm of stone columns to reduce settlement and increase the bearing capacity. The column length ranged from 9 m to 16 m with a design diameter of 600 mm.

Vibrodisplacement stone columns can also facilitate drainage of layered soil formations. Excess pore water pressures can be rapidly dissipated through the open grain structure of the stone columns. This feature offers considerable advantages particularly in earthquake zones by preventing liquefaction of the soil during earthquakes. In addition, horizontal vibrations can be dampened by the relative flexibility of the foundation.